Sunday afternoon was Staff training for summer counselors! Thanks to the area wide youth ministers for coordinating this effort for camp. 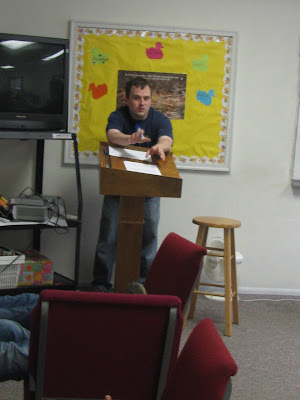 There were four classes that potential staff circulated through. 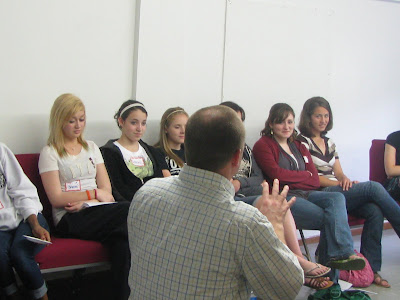 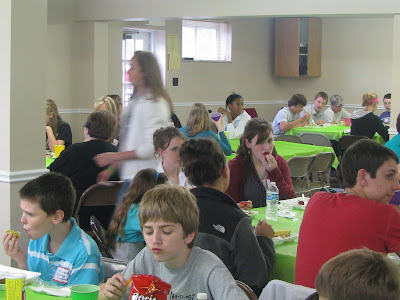 The annual "picking of the shirt"! 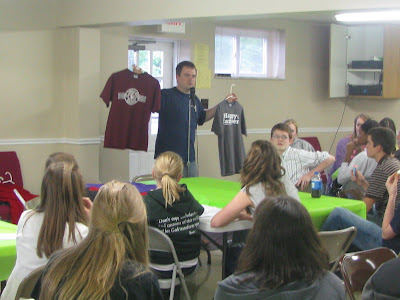 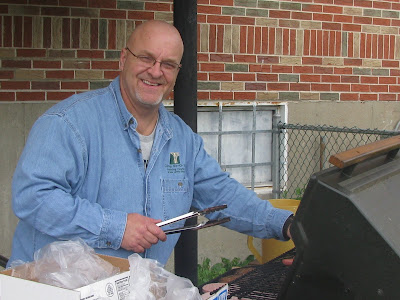 Staff Training is this Sunday, April 25th. Teens - if you are planning to work at camp this summer you need to attend staff training! We begin with lunch at 12:30 pm. Location is: Maryland Heights Church of Christ, 107 Midland, Maryland Heights, MO 314-739-8656 You don't have to pre-register - just show up! 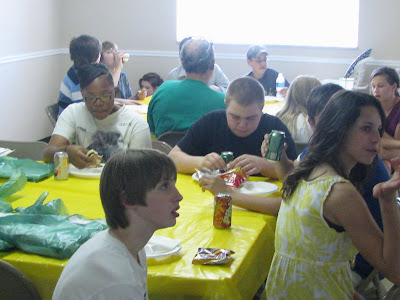 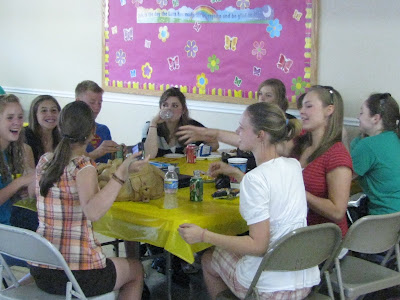 JD is going to once again be grilling hamburgers and hot dogs for lunch! 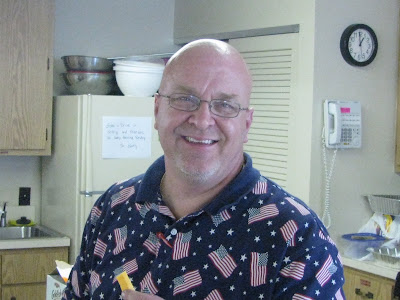 We will be picking the design for the 2010 Camp Shirt! 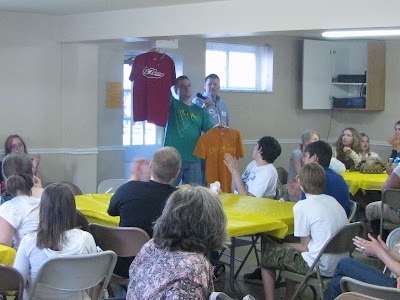 Welcome to Nate and Christea Reiser and their children Nick and Amy. The Reiser family will be moving to camp the first week of June. We are excited they are going to be the Ne-O-Tez caretakers! 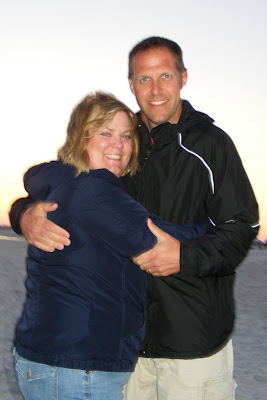 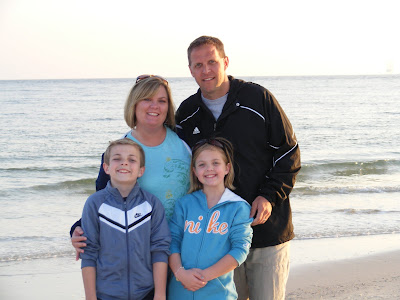 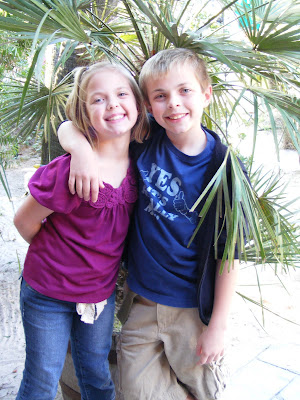 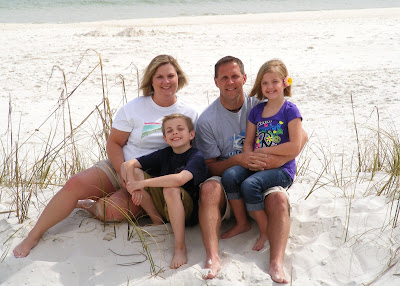 The annual dinner was held last Friday evening. We were blessed with donations of $42,131. Thank-you to our faithful supporters. That night we heard four individuals share their feelings about Camp Ne-O-Tez. Read below the stirring comments from Amy. 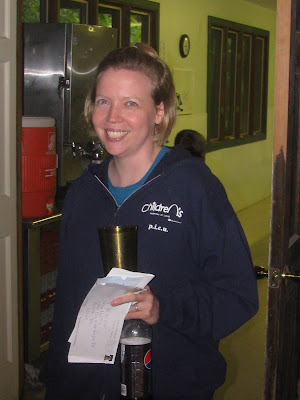 
Camp is more than singing about frogs that go flo-do-di-o-di-o, three bluepigeons and sippin' cider... more than bug bites, poison ivy, sweat, rain and mud... more than knowing where to be when the whistle blows next... more than running to get in the front of the lunch line... more than hikes to inspiration point and campfires in the dark... more than mail call and standing in the slop bucket... more than catching crawdads in crystal falls.

Camp has been, and continues to be one of the few constants in my life. From the very first year that I was old enough to pack up and go off to camp, I knew that I had found something special. I couldn't necessarily define that'something', but it was what kept me coming back week after week... and year after year. As I grew I found friendships there... people to love, laugh with, and lean on when times were tough. For a week at a time I inherited a whole troupe of sisters to play with, work with and fight with. We fell in and out of love with the dishwashers, learned and studied in Bible class,and played hard in the Ball Field. I had some phenomenal counselors who were godly, nurturing young women leading by example and showing me the type of person I wanted to be. I adored them, admired them, and tried to emulate them. These relationships continued on long after the camp session ended.The friendships made there were so strong, and so fast... I continue to be amazed at how such strong bonds can be forged in the span of 6 days... on the first day, everyone's new and shy, and by Friday night each cabin acts as a cohesive unit.

As I transitioned from camper to counselor, I fell even more in love with camp. I loved my girls, and wanted them to love camp just as much as I did.There were some summers I would come home Saturday, exhausted from a week at camp, throw the contents of my suitcase into the washing machine and go to bed... only to pack it all back into the suitcase from the dryer the next morning to go back down for another week. Whether it was being acamper, a dishwasher, or a counselor, I just couldn't get enough. Looking back, I am so thankful for the influence of camp as I tackled the painstaking process of defining to myself who I am. Having been a teenager once, I admit that I never want to be one again... Trying to figure out who I was and where I fit in this world was overwhelming... and all of my questions seemed to lead to more questions. I have to admit that there were times at camp where I was broken... But looking back, I am just floored at the way God used camp to forge and shape my heart.

The memories I treasure most from that time, are from getting to know and love my creator. Camp has always been one of those places where I can feel God and His love more easily. I was baptized by my father in Crystal Falls, and I remember the joyof that day... I felt like I was glowing I was filled with so much Light.

Over the years, a few things have changed at camp... there may be some new paint, a new structure or bridge... but camp itself... the spirit and essence of Ne-O-Tez is unchanged. Now I am one of the parents that drops her children off on Sunday afternoon, makes sure they get one of the "good" bunks and kisses them goodbye. I write letters throughout the week, and can't wait to hear all of the camp stories they come home with. They talkabout nothing else after they get home, and sing songs in the car. It seems like every year there are a few new campfire songs... but the oldies and goodies are still around. I have learned to be careful when unpacking the contents of their suitcases... every now and then an errant stink bug or spider makes the trip home with them... But each year, when I pick them up on Saturday, under the dirt and grime, I see the light in their eyes that I recognize... the light of children who are learning to love and adore their Father in His place... and I rejoice.

Last summer I had the joy of watching my oldest daughter commit her life toChrist, being baptized by her father in the same waters where I so many years ago was baptized by mine. Her face was radiant, and I know that she is writing her own life story, and that Camp is a very special and important part of that story.

And as for myself, I still can't give up camp entirely. I have found a home in the nurse's role, and get my yearly 'camp fix' while kissing skinned knees and treating bug bites. I sit and quietly watch camp life going on as it has before and as it will continue to do after my own kids are grown and gone. The clothing styles and haircuts are different from my own lineup of camp pictures, but the discoveries and emotions are the same. God continues His presence at camp... and I am excited and honored to be a part of His work there.
Posted by Camp Ne-O-Tez at 11:50 AM 2 comments: